The relevance of my research


The other day one of the undergrads in our lab said that ze didn’t get what the relevance was of the research that I am doing. At first I was kind of annoyed by this, but later I started thinking about the relevance of my research and how to better convey this during lab meetings perhaps. Not to go into too much detail about what I do, I think it’s enough to say that I use animal models to study aspects of psychiatric disorders. And to be honest: on a daily basis I find it much more interesting to find out little pieces of information about how the brain works, then to find the cure for depression for example. But I do realize that to the large public, most funding agencies and to the undergrad in our lab the latter is more important.

But some days I realize extra how important it is that we do research. One of those moments was when Glenn Close talked at SfN in 2010. She talked about how several members of her family were suffering from psychiatric diseases and how this affected their lives. It may have been because I was pregnant, but I was very moved by her presentation and the fact that all those thousands of neuroscientists were there realizing what they are working for. (I know this sounds extremely cheesy, but remember people that I was pregnant and very easily moved to tears).

Yesterday night was another one of those moments. A couple of colleagues and I went to a psychiatric hospital to play bingo with the people who live there. This was initiated by the church that one of my colleagues goes to, but we are planning to do it more often with the lab now too. Before we went we were all kind of nervous; what was it going to be like and what were the people going to say or do? It’s awkward realizing that you can talk about psychiatric disorders on a daily basis, and write in papers what a devastating illness it is, but almost never see an actual patient.

I got there kind of early yesterday and the psychiatric hospital looked a lot different than I thought it would: it was more like a college campus with small buildings here and there instead of a real hospital. It started to get dark and it was quiet and kind of eerie. After everyone had got there and we went inside, the place looked a lot like the psychiatric ward in “One flew over the cuckoo’s nest”. It was a pretty old building and we gathered the people in their dining hall, which had very simple tables and chairs. The people were very happy and excited that we were there, and immediately it wasn’t scary anymore; we started talking to some of them about normal everyday things. Other just sat and stared. 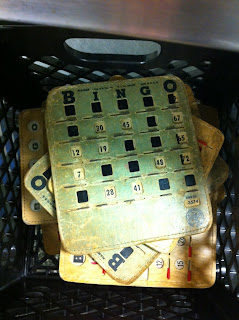 The reason that we were playing bingo with them is that it is an excuse to give them simple things. Apparently if you are in a state psychiatric hospital, you don’t get toiletries other than hand soap (so no shampoo, no deodorant, no tooth paste) and you barely get any clothes. Many of these people didn’t get a lot of visitors to bring them these things. So we played bingo with them so that they got these things as prices. And we ate cheese puffs with them, because many of them didn’t have enough teeth to eat other snacks. It was both great and sad to see how happy they were with tooth paste, deodorant and our old clothes. And it made us realize that this is what we do our work for: to understand how these people develop psychiatric disorders, and more importantly to maybe one day develop a cure for them.
Posted by InBabyAttachMode at 6:28 AM

InBabyAttachMode
I am a post-doc doing slice electrophysiology. When I’m not in whole cell mode, I tend to be in baby-attach mode with BlueEyes, who was born in the summer of 2011 and/or Little Brother, who was born in the winter of 2013. I write about neuroscience, life in the lab and my newest hobby: babywearing. Also, I am from Europe, and together with my husband (referred to as dr. BrownEyes), who is also a post-doc, I moved to the US in 2009. You can find me on twitter @BabyAttachMode

Blogs that I read